1945 Visit Of The Russian Giants

Winter of 1945 saw excitement sweep the footballing public of Great Britain. News that the Soviet champions Moscow Dynamo had accepted an invitation from the FA to travel to England and compete against some of the country’s best sides had caused much speculation as to the quality of football beyond the Iron Curtain.

Upon hearing the news of the Moscow Dynamo tour, Bill Struth sought to bring the Russians north to face Rangers, enlisting the help of the SFA. Not part of the original itinerary, the Soviets weren’t keen.

Naturally, given the politics of the time, if there was any notion that this was purely a sporting endeavour, then that was swiftly displaced when the Moscow men were whisked away to meet with Josef Stalin before travelling to England, where the importance of defeating the western sides was impressed upon them.

Their first port of call was Stamford Bridge, and a match with Chelsea. Unsurprisingly, the match was a sell-out with everyone wanting to catch some glimpse of the mysterious Muscovites. Star of the show was the famous Alexei “Tiger” Khomich whose man of the match display in goal earned Dynamo a 3-3 draw.

The next stop was Wales to play Third Division side Cardiff City. The neat passing moves coupled with the fluidity in positions that characterised the famous style of “organised disorder” saw the tourists romp to a 10-1 triumph.

The main event was still to come. The clash with Arsenal was organised at the express request of the Russians, and was to be officiated by a Soviet referee. The Arsenal side was an unfamiliar looking one. No fewer than 5 guest players would appear for the Gunners including Stanley Matthews and Stanley Mortensen in a move that was to attract the ire of the tourists.

In a controversial thriller, it was the men from Moscow that emerged victorious by 4-3 on an extremely foggy night, Arsenal having a goal disallowed with the scores at 3-3.

With the pre-arranged part of the tour over, Moscow Dynamo finally agreed to make the jaunt to Glasgow for a match with Rangers to bring their groundbreaking tour to a close. At first extremely hesitant to add another date to their arduous tour, it came with several conditions, adding to the extensive list the Soviets had demanded before even leaving home. These included such things as eating exclusively at the Soviet embassy, rumoured to be because of fears of poisoning.

A request that was met with particular consternation by Bill Struth was the allowance of substitutes in the game, a concept unheard of in British football.

It looked as if all hurdles had been overcome when another reared it’s head and threatened to call the game off. Ranges had just recently re-signed winger Jimmy Caskie and as such was available for selection against Dynamo. Having already been on the receiving end of some questionable conduct regarding “guest players” against Arsenal, the Russians specifically wanted Caskie barred from playing. The issue rumbled on with Struth keen to have his new man available. One story of the time was that whilst on a tour of the shipyards of the Clyde, the Moscow Dynamo were confronted with a message daubed on the side of one ship which read “Who’s afraid of Caskie?”

With the Soviets refusing to blink and threatening to go home without playing at Ibrox, the demands were met and the match was on. 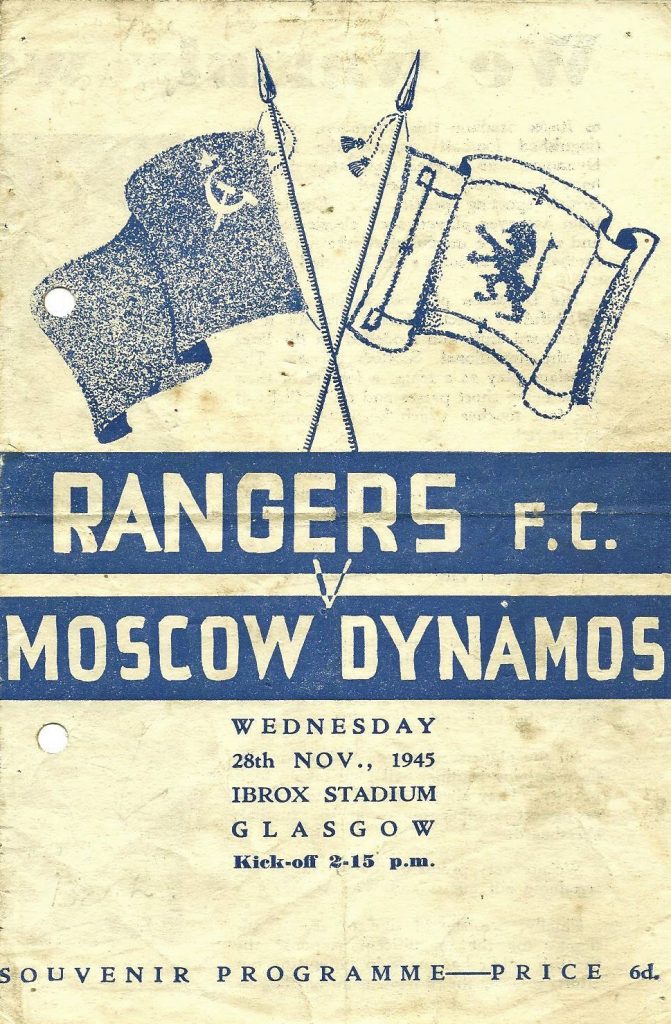 Game On At Ibrox

Unusually, the match was played on a midweek afternoon. It didn’t prevent a crowd of 95,000 turning out, in an all-ticket affair, on what must’ve been a record day for sick lines in Glasgow!

The sides lined up as follows:

Two unusual things were practiced by the Russians. Firstly, they came on to the pitch before kick-off for a pre-match warm-up, and secondly each player insisted on gifting their opposite number a flower.

But when the match started there was no doubt the Soviets were capable. Only two minutes had been played when they went ahead through Kartsev, whose 20-yard free-kick somehow found its way past Dawson.

The Gers didn’t have to wait too long for an opportunity to respond. Within three minutes, Watkins was upended in the penalty area and the referee pointed to the spot. Up stepped Willie Waddell, but his effort was straight at Khomich who deflected the ball onto the crossbar.

Halfway through the first period, the Soviets demonstrated again their unique style of football to great effect. A beautiful passing move starting at the back and progressing all of the way through to the attacking third culminated in a pass through to Kartsev who doubled his own and Dynamo’s tally with a low drive beyond Dawson.

Dynamo controlled much of the play, excellently retaining ball possession. Minutes prior to half-time, Rangers earned themselves a lifeline. Jimmy Smith bundled the ball over the line in a stramash to pull it back to 2-1 at the break.

By this point, a dense fog had descended upon Ibrox. Perhaps the most memorable moment of the second half occurred at around the hour mark when the Russians paused to make a substitution: Nikolai Dementiev replacing Vsevolod Bobrov. Rangers also made use of the new capability and introduced Jimmy Duncanson in place of Jimmy Smith, who had suffered an injury in an aerial duel with Khomich. However, Bobrov failed to leave the park. It was only when Torry Gillick drew the referee’s attention to the fact there were now 12 Dynamo players on the field that this was rectified. Remarkably, it wasn’t the first time that this sort of thing had happened on the tour. There had been rumours that the Soviets had attempted a similar trick against Arsenal, but what certainly did happed was George Drury of the Gunners returned to play the remainder of the game after being sent-off for fighting.

There was still time left for further controversy. With 15 minutes left, the Light Blues were awarded another penalty. The Moscow players felt it soft and forced the referee to consult his linesman. The protests were in vein and the original decision stood. George Young took over the spot kick duties and made no mistake, scoring the penalty to level the scores.

2-2 was the final score. The Soviet football champions departed for home the very next day, with a very creditable showing from their stay in Great Britain. Of the Dynamo XI, it wasn’t the last Ranges would see of Konstantin Bescov. He was the man in-charge of Dynamo when they were defeated by Rangers in the Final of the 1972 European Cup-Winners’ Cup.