Season 2001-02 was somewhat of a mixed bag for Rangers. The league had been all but lost by the turn of the year, the Dick Advocaat era had come to an end, and the financial reality that would necessitate the squad downsizing had become evident.

And yet despite all of that it still provided one of the greatest memories that most Rangers fans possess.

The arrival of Alex McLeish had restored a sense of unity amongst the squad, and brought an almost instant impact. The defeat of Celtic in the League Cup Semi-Final had ended a run of 5 straight defeats to Martin O’Neil’s side.

Celtic on the other hand had won 19 of their 21 league games by January and had scored 10 times in their two Scottish League Cup ties prior to being put to the sword by Bert Konterman’s wonder-strike. On the Scottish Cup front, they had yet to concede a goal en route to the Final, scoring 12 as they despatched Alloa Athletic, Kilmarnock, Aberdeen and Ayr Utd.

Rangers began their Cup run with a fairly turgid tie against familiar foes Berwick Rangers that required a replay. What followed were comfortable victories over Forfar, Hibernian and Partick Thistle.

The result would be the 14th Old Firm Scottish Cup Final set for 4th May 2002. Remarkably of the 13 previous editions (with the 1909 Scottish Cup being withheld following crowd trouble) victories for each side were split at 6 apiece.

Rangers’ preparation for the final in the week leading up the Final consisted of light training sessions on the Monday and Tuesday, followed by a day off with squad meeting at an Italian restaurant in an effort to relax the players ahead of training being intensified towards the tail end of the week. The Rangers party would be awoken at 4am on the morning of the game following a fire alarm in their Moat House Hotel. Kept outside for almost an hour, it was believed the incident concerned a hoax bomb warning.

Martin O’Neil, who was able to rest his entire starting line-up the previous week, had been without Chris Sutton, Bobo Balde and Paul Lambert in the weeks leading up to the Hampden showpiece, but all three were included in the XI. More than likely with an eye on using set-pieces to their advantage, Celtic would manage to fit Sutton, John Hartson and Henrik Larsson all into their starting line-up.

Rangers loaded their attacking trident with pace to exploit the lack of mobility of Celtic’s back three, deploying Peter Lovenkrands, who had netted twice in his last three appearances against Celtic, as a number 9.

The teams that took to the field read as follows:

As the sun shown on the pristine Hampden turf, a far cry to what it had been when the same two sides had met earlier in the season, it was evident from the early stages that this Rangers side were bang up for the challenge. The front three were bamboozling the Celtic’s defence of Sutton, Mjallby and Balde with neat interchanging movement and runs in behind.

With the game little over a quarter-of-an-hour old, Caniggia set off on a run down the right flank having beaten Neil Lennon, to then be taken out by Chris Sutton with a bodycheck that would have been more at home on an ice hockey rink. It was clear that the Argentine was struggling and was forced off the pitch for further treatment by the physio.

With Rangers temporarily down to 10 men, Celtic maximised the advantage to pose their first real threat of the contest. Hartson forced his way beyond Mo Ross on the right-hand side of the penalty area and was able to dink a high ball into the penalty area. Perhaps slightly disorientated at that moment in time, Stefan Klos clawed the ball over the bar for the concession of a corner.

Alan Thompson, who was always dangerous from a set-piece, curled the ball deep to the back post finding Balde. His header was driven straight down into the ground and as it rebounded back up off the turf, Hartson was left unmarked inside the six-yard box with the fairly simple task of nodding the ball past de Boer on the post and a scrambling Stefan Klos.

If going a goal down wasn’t a big enough blow for the Gers, they would also be forced into making their substitute with only 22 minutes played. Caniggia was unable to continue and was to be replaced by fellow summer signing Shota Arveladze. Caniggia had looked bright in the opening salvo, and despite failing to make a significant impact initially, had experienced an upturn in fortunes after the arrival of Alex McLeish that coincided with a return to the Argentina squad following a dispute regarding his hair.

However, Rangers’ response was instant. Ferguson sent a ball near enough straight from kick-off into the channels for Lovenkrands to chase. With Sutton and Mjallby managing to get in each other’s

way, the Swede’s loose header was collected by the Dane who take one touch to bring it inside onto his left-foot and pulled off an exquisite finish at Douglas’ near post.

Unsurprisingly, the goal had a rejuvenating impact on the Light Blues. Lovenkrands forced Douglas to make a save with a bicycle kick volley from a pinged Ricksen cross, and then Hartson was fortunate not to face a severe punishment for a blatant elbow on Craig Moore.

Rangers would then come close to taking the lead. Lovenkrands moved a ball out wide to McCann whose first-time cross low across the face of goal was just a matter of inches ahead of Arveladze arriving at the backpost.

Celtic launched a high ball and Amoruso’s failure to adequately head clear was almost costly as Larsson moved in ahead of him through on goal. Fortunately, he would lose his footing and spurious claims for a penalty were waved away.

O’Neil’s men would have the last meaningful effort on goal when a deep Alan Thompson free-kick found Balde, but Klos was able to get down and hold.

Before Dallas could blow up for the interval, Celtic would be forced into making their substitute. Lambert, who had been a fitness concern pre-match and failed to make any sort of an impact on proceedings had to be withdrawn and replaced by Jackie McNamara.

Whilst the first half had been incident-packed, there was still plenty more drama to come.

Again, Celtic launched a long-ball into the channels. The knockdown in behind to Larsson saw Amoruso clumsily bring the Swede to ground, conceding a free-kick in a wide area. The resulting set-piece was swung in deep by Lennon and Balde, again, was there at the backpost but this time able to head goalward to give his side a 2-1 lead.

It did nothing to dissuade the Light Blues. Immediately they were on the front foot again and a neat chipped ball forward by Ferguson was knocked down by de Boer but the arriving Lovenkrands could only blaze over.

At the other end, claims for a penalty were dismissed by the ref as Hartson, under pressure by Moore after receiving the ball with his back to goal, threw himself to the ground.

If there was one man who was certainly not going to be on the losing side that afternoon it was Barry Ferguson. A driving force at one end of the park, and adept at breaking up play at the other. It was one of the most complete midfield performances that Hampden has seen and will ever see. On one occasion, beating Lennon to a loose ball in midfield, skipping past a wild Agathe challenge and only after spraying the ball out wide and getting Rangers into the final third, casting back a glance and making his discontent with the attempted tackle clear.

As Ferguson played McCann down the left wing, Numan made an overlapping run and with a delay, was slipped in by the Greenock winger. With typical composure displayed by the Dutchman, he elected not to flash the ball across goal but showed incredible awareness to cut it all the back to Barry Ferguson. After one touch to control the pass, his shot, from fully 30-yards out, would come crashing off the inside of the far post, letting Celtic off the hook.

Following a McCann corner, Balde recklessly challenged Amoruso and conceded a free-kick. There was only one man who would be taking responsibility for this one. Straight away, Ferguson grabbed the ball and his side-foot strike sailed over the wall, beyond Rab Douglas and straight into the top corner to level the match.

Larsson would try and emulate the Rangers skipper at the other end, but his attempt was sent straight off the wall and his rebound was spectacularly skied over the bar.

It was by now entirely one-way traffic. Ferguson clipped a ball in behind the Celtic defence for Lovenkrands. But the awkward height of the ball meant he was unable to bring it down and his hopeful effort at goal was straight at Douglas who again spilled the ball to give away a corner.

The next chance would again be the creation of Ferguson. Spotting a darting run made again by Lovenkrands, his looping long-ball beat the Celtic rearguard, but Mjallby, with both hands on the Dane’s shoulders preventing him from challenging for the ball, was incredibly lucky not to concede a penalty.

With the game in the dying embers, Amoruso progressed upfield, beating Hartson, and shifted the ball out to McCann. Initially, he looked to drive at his opposite number, he steadied himself to assess if the early cross was on. As Ian Crocker spoke the prophetic words “is there going to be a twist in the tail,” McCann spotted the run of Lovenkrands. A delightful ball was played in behind the Celtic defenders, and the Danish forward, who hadn’t stopped running all day, stooped down to head beyond Douglas. An iconic moment in Rangers history, the Danish forward took off beyond the goal to take the adulation of the Rangers supporters, bedecked in union flags and going absolutely berserk.

The Cup had been won for the 30th time, but this just might have been the most dramatic triumph yet. Remarkably, in a season that had been dogged by so much discontent and upheaval in both the playing squad and management team, Rangers ended the season with 2 out of 3 domestic honours.

And next season they would go one better. 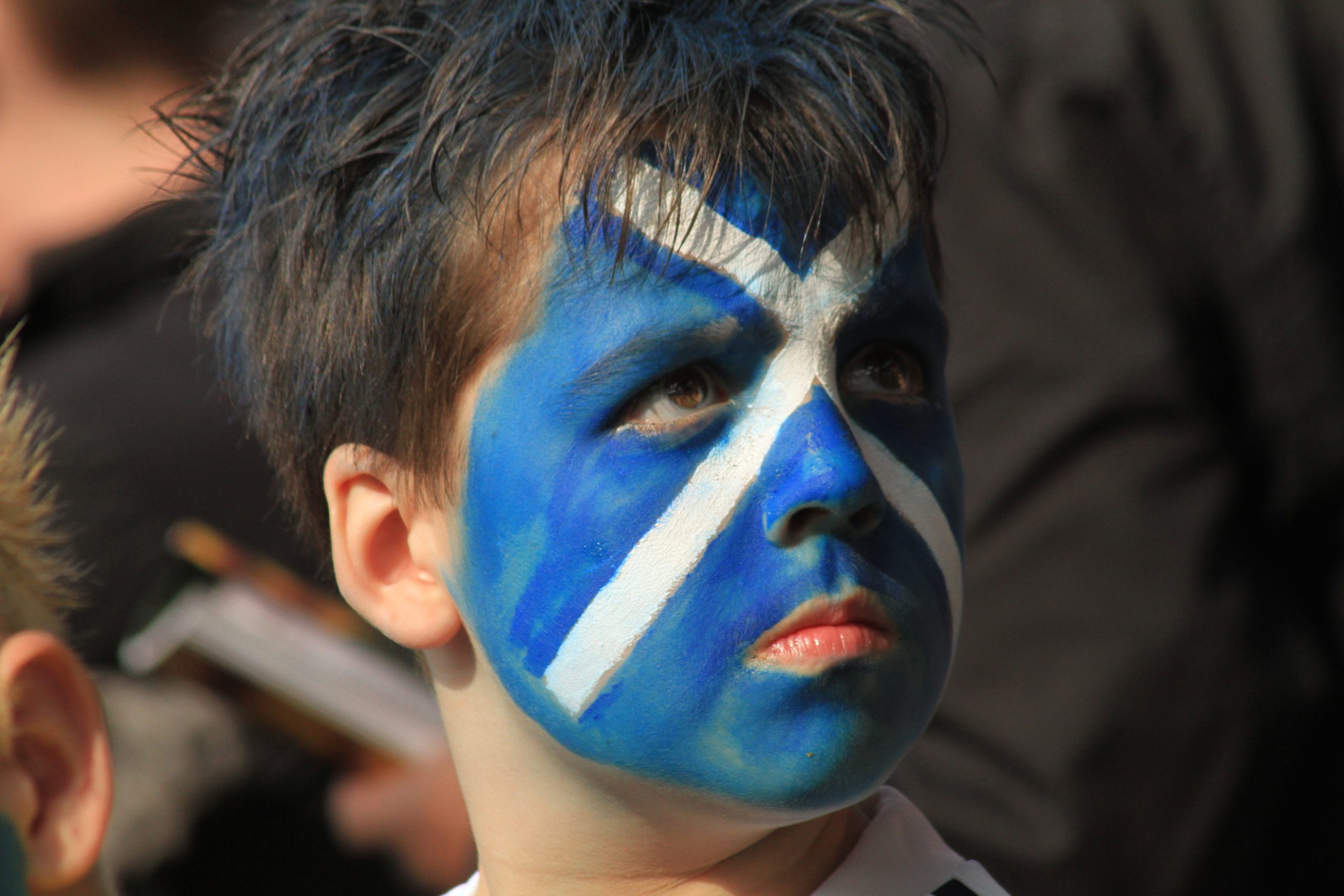 What Euro 2020 Qualification Meant To Us

“The near misses, the humiliations against minnows, the surprising wins and the shite managers have all contributed, to an extent, towards us eventually reaching a first major competition since the 1998 World Cup in France.” 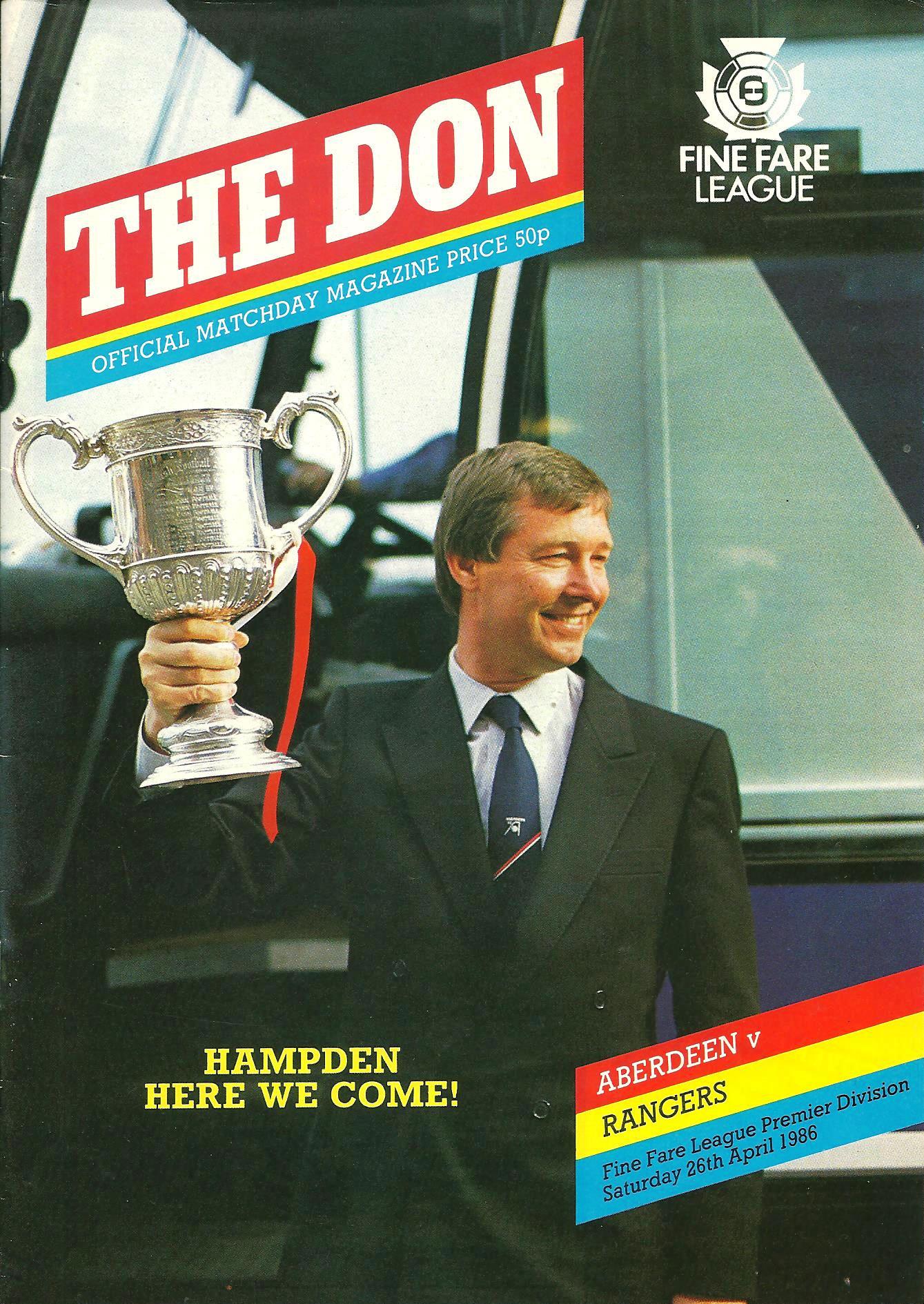 Fergie at Aberdeen – The Making of a Legend

The Granite City allowed him to shape his philosophies and with time, excellent scouting and an abundance of youth prospects, he challenged the hegemony of the Old Firm and established Aberdeen as the best side in Scotland. 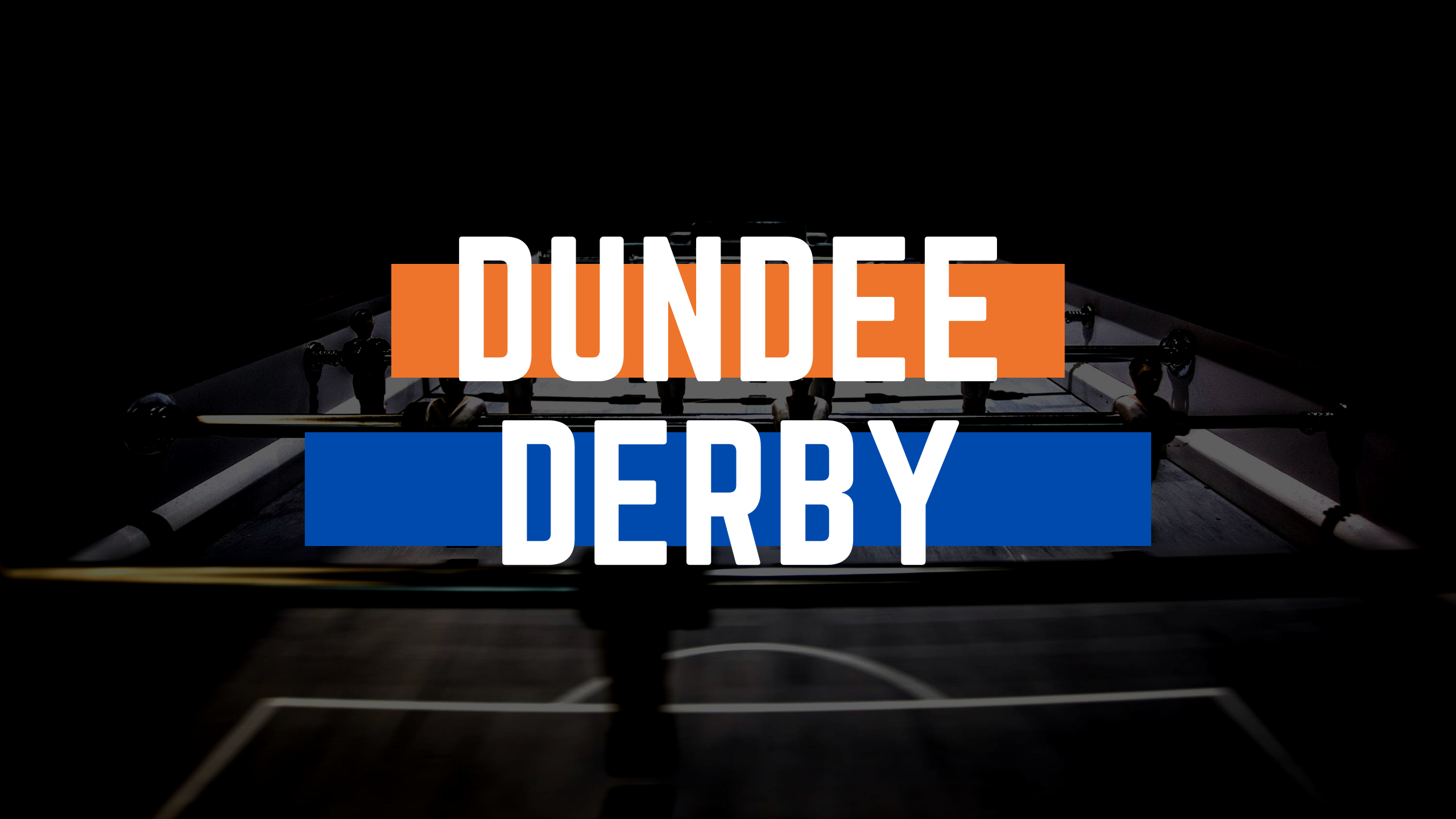 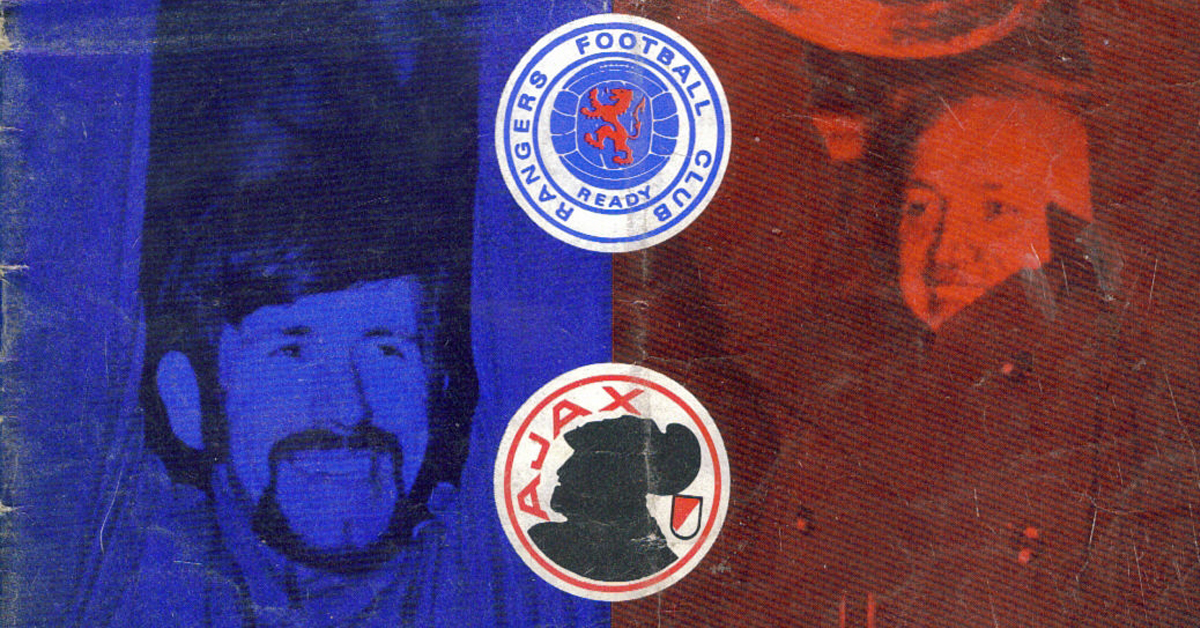