Season 1962-63 had seen Rangers recapture the League title and defend the Scottish Cup. Only the League Cup had escaped the Light Blues’ clutches in a domestic sense. As usual, the following campaign offered an immediate chance to put that right with the season beginning with the sectional phase of that very competition.

Rangers topped their group which contained Hibs, St Mirren and Third Lanark. The League had seen a mixed start: a draw with Dundee but a victory over Celtic. East Fife were then defeated 3-1 on aggregate in the Quarter-Final of the League Cup before Berwick Rangers were despatched 3-1 in the Hampden Semi.

On the European front, Rangers could not have had it more difficult. The Preliminary round of the European Cup had them paired with a star-studded Real Madrid. A creditable performance was put in at Ibrox with Puskas scoring the only goal with three minutes left, but that was followed by a 6-0 drubbing at the Bernabeu. 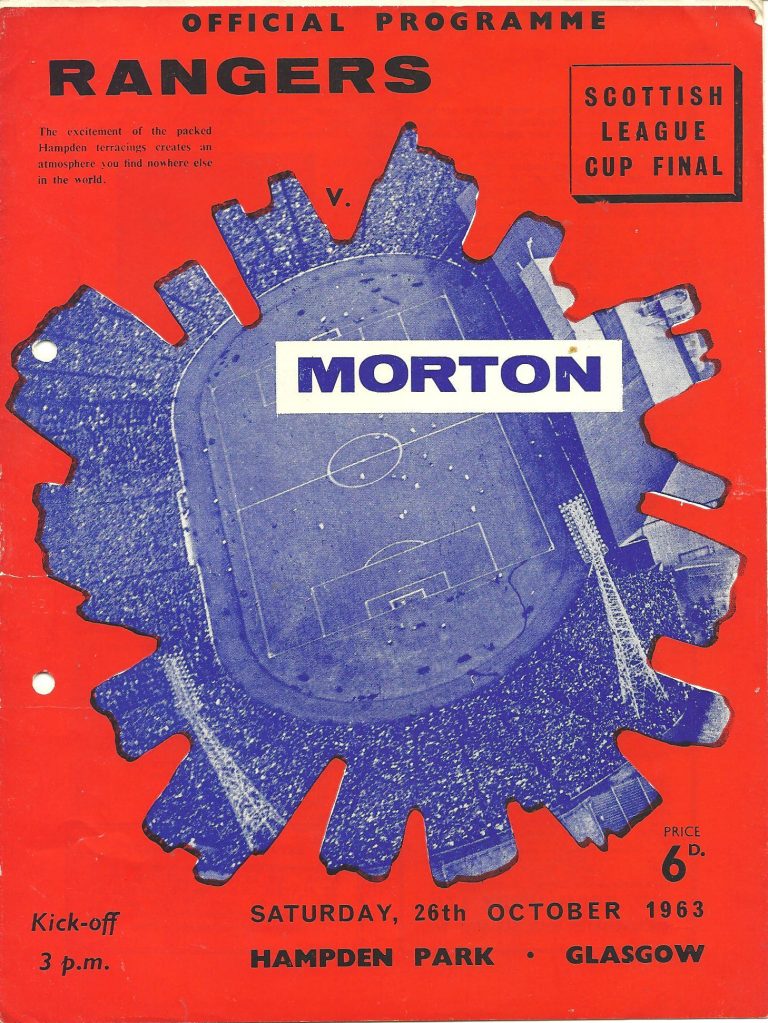 League form had held up, and by the time the League Cup Final arrived, Rangers were top of the table, with 7 wins from 8 and 2 points clear of Dunfermline.

Awaiting in that League Cup Final were Greenock Morton. Rangers and Morton shared some history when it came to domestic cup finals as it was the Ton who had caused a major upset in 1922 with a 1-0 victory. Revenge was gained in 1948 when Billy Williamson scored for Rangers who lifted the trophy after a Replay.

Despite being in the Second Division, Morton, under the guidance of Hal Stewart, had already accounted for two First Division sides in the League Cup: Motherwell and Hibernian. Even so, they were still priced 6/1 by the bookies. Stewart whisked his side away for a 4-day retreat to Bridge of Allan for preparation.

Rangers may have been seasoned cup winners, but they were set to name a starting XI that contained 6 players who still had not won a League Cup medal. 105,907 made the journey to Hampden for the showpiece, and the two sides lined-up:

The match was officiated by H.Phillips of Wishaw.

It was Morton who made the first attacking move on a windless grey day. Adamson charged 30-yards downfield within 5 seconds and created an opportunity for Black Campbell to fire in a shot at Ritchie’s near post, but the ‘keeper was more than up to the challenge, catching the ball and getting Rangers on the counter straight away. Henderson progressed down the wing and provided an excellent cross, but Watson’s header wasn’t enough to put the Gers ahead.

After the initial whirlwind start, inevitably the game slowed down and Rangers began to assert themselves. Watson again had an opportunity, forcing a great save from Brown from 18-yards out.

Whilst Rangers enjoyed possession of the ball, Morton more than lived up to their reputation as being a team always able to rise to a cup occasion. Every time a Rangers forward took possession, he was surrounded by two men in blue and white hoops. They may have offered very little in an attacking sense, but that was to change on 35 minutes. Shortly after going down injured, Morton’s star goalscorer McGraw rose up to head goalwards an Adamson corner. It beat Ritchie, but also the crossbar by a mere 2 inches.

Mr Phillips blew for half-time with the scores still level at 0-0. Morton had been successful in frustrating the Scottish champions, but how much longer could they keep up the intensity?

The second half started almost identically as the first. Morton surged down the line and Baxter was forced to concede a corner inside a minute of the restart. Morton appeared to have spotted a weakness down Rangers’ left side, necessitating John Greig to drop deeper and offer some cover. Just as they did so, ever the nimble tactician, Stewart switched his offensive moves to the opposite wing and it almost immediately proved fruitful. Adamson got off a shot that just went wide of Ritchie’s post.

Rangers steadied the ship after the early assault. Henderson moved down the wing and got all the way into the Morton penalty area. Brown, perhaps misjudgingly, came off his line to meet the no.7 and in doing so allowed Jim Forrest an open goal when Henderson squared the ball for 1-0 on 52 minutes.

Rangers began to move the ball around in a more measured way than they had done before. Morton still posed a threat, however. Campbell flicked a header across the Ritchie’s goal, and if Adamson had been alert to it sooner, he would have had a tap in from all of three yards.

The Light Blues again went on the offensive. Watson from the left slipped in Forrest and like a flash, the man who had broken up the Brand-Millar partnership showed just why he had, catching the ball and lashing a shot into the net from 10 yards. 2-0 after 59 minutes.

But again Morton tried to get back into the game. A clever free-kick saw Wilson shoot wide of the goal despite having a clear sight of the target.

And again, Morton were almost instantly made to rue the missed opportunity. Cousins Forrest and Wiilloughby conspired to make it three. Willoughby the scorer and Forrest, for a change, the provider.

Even 3-0 down, and with less than half an hour to go, Morton were still giving as good as they got. McGraw smashed a shot from fully 40-yards which Ritchie could only turn over the crossbar. The resulting corner saw Campbell have a shot deflected for another kick which came to nothing.

In the match’s typical end-to-end style, Rangers strived to make it a 4-goal lead. Alex Willoughby was the main creator of Rangers’ chances, and so it was again when Brand fired into the side-netting.

Even with just 5 minutes remaining, Morton were still fighting away. McGraw rattled the crossbar from 18 yards.

With 88 minutes on the clock, Watson passed to Forrest who converted for his hat-trick. The goalscoring was not done. A minute later and it was 5-0. No surprises, it was Forrest the scorer, becoming the only Rangers player to score as many as 4 times in a major cup final.

It had been a truly family affair with Jim Forrest and Alex Willoughby the stars of the show in a dazzling second half display. Neither mightn’t have had the Rangers careers that most thought that they were destined to, but they more than played their part as the Ibrox men clinched the first part of what would be an eventual treble.

Morton also had their success. Storming away with the Second Division title, by 14 points from Clyde and securing a mid-table finish the following season.