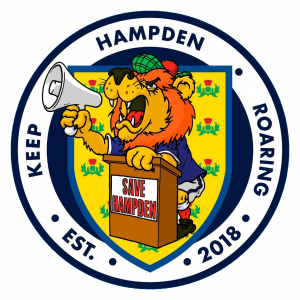 The future of Hampden Park was one of the biggest talking points of Scottish Football last season. The SFA’s lease on Hampden runs expires in 2020, but the governing body are set to decide on its future this Summer.

A proposal to hold international matches and cup games at Ibrox and Celtic Park was rejected at a board meeting, which narrows the options down to two. Remain at Hampden, or move to the Murrayfield, the home of Scottish Rugby.

The Keep Hampden Roaring campaign kicked off to encourage the SFA to remain at Hampden and respect the history of the venue. Their mission statement:

“Our mission is to ensure that Hampden fulfils its potential as the home of football. That starts with securing Hampden as the home of Scotland’s national football team which is currently under threat of moving to Edinburgh.” via Hampden Roar

I sought out the campaigners to learn more about what this means for Scottish Football and Queens Park and they were happy to oblige.

1. First of all, thank you for coming on. Would you like to give yourself an introduction and tell the readers how you got involved in the campaign?

The story actually starts before the campaign. The Hampden Collection was created in December 2017  with the launch of a Facebook page, Twitter account and Website. This was following the discovery of the exact location of the 1st Hampden earlier that year. Very few people know there are 3 Hampden Parks in Glasgow and most don’t understand the part they have played in the creation of World Football. Therefore the mission is to collate and celebrate all 3 Hampden Parks and showcase their incredible history. There is a national football museum but it focusses on all of football. However Hampden alone has enough history to have its own collection and to date there hadn’t been one of its kind.

At the same time there was a lot going on about the 3rd Hampden and we quickly realised of the potential for the SFA to leave. The 1st and 2nd Hampdens are testament to what happens if the SFA were to leave Hampden. 1st Hampden was lost for a 100 years and the 2nd Hampden is now a derelict monument otherwise known as Cathkin Park.

The #KeepHampdenRoaring Campaign was a grassroots campaign to bring a spotlight to one of the most important Scottish football decisions of all time. If 3rd Hampden were to go, it would be create a whole in the SouthSide that would take decades to fill or worse it could lay empty, derelict and become a social sore that no one wants. This would be a travesty for a record breaking, historic and versatile football, music, athletics and conference venue.

2. How many people contribute to the campaign?

We have a number of people that quickly got together. All have a shared mission to bring a focus to the Hampden situation. We have built two social media platforms in a bid to create a groundswell of understanding and support to preserve, protect and promote the 3 Hampden Parks. We have created posters, banners, graphic images and poems showcasing Hampden and have gotten in front of politicians, councillors and even made it to the Scottish Parliament, as well as having articles in the Herald, Evening Times and Scotsman. The foundation of our overall mission is keeping 3rd Hampden alive and well and we have an initiative called Greater Hampden. If 3rd Hampden dies everything else becomes harder. #KeepHamdpenRoaring is the foundation to build from and get us noticed.

3. Why do you think this is important for Scottish Football?

It is very simple. A very simple decision by the SFA that could have a tsunami impact for Glasgow and the footballing world. One of the most iconic stadiums would be lost if the dice roll in a certain way.

A stadium that has showcased every Scottish footballing legend and hosted the world’s best from Zidane, Puskas, Di Stefano, Charlton, Maradona, Cruyff, Best, Beckenbauer, Linekar, and even the mighty Pele. Then add the legendary music acts that have played at Hampden – U2, Beyonce, Bruce Springstein, AC/DC, Rod Stewart and Coldplay. How many places in the world can say that? If you walk inside or outside the ground you can feel there is something different about this place. Look up into the stands and think what it would have been like to have been here when 149,415 people crammed into this cauldron of noise. And when a goal was scored you could be heard 2 miles away. There is no place on earth that has this history and iconic status. How will you feel when you are telling your grandchildren that the Hampden Park Housing Estate was once the greatest stadium in the world?”

At the end of August the SFA will make a decision on whether to stay or move 45 miles to Murrayfield. If it is to move to Murrayfield then it is the end for Hampden and quite possibly for Queens Park Football Club. There is no point believing there is any other outcome. The two competing stadiums could not be more different. Our campaign is about putting the facts out there. Bursting the myths and making the case for the national stadium to stay exactly where it has always been.

It is clear what we will lose. A national icon envied around the world. Do you know if we give up Hampden the rest of the world will simply say: “why on earth have you done that”. Other countries would bite your arm off for what we have. Hampden encapsulates all of this. The stadium does need a make-over to improve the viewing for spectators. That is widely accepted. But there is no need to throw the baby out with the bathwater. It has been refurbished before and can be lovingly rebuilt once again. We laugh when people say the stadium is finished. Just ask Harry Kane. He said he had never heard anything like it when the 2nd Scotland goal went in at the recent Scotland v England match. That’s Hampden! That’s the roar! Its still alive. Its still kicking.”

4. What would this mean for Queens Park?

Do not misunderstand the potential gravity of the current situation. Through the beauty of historical accident, our national stadium is in the hands of a club which chose to remain amateur in 1893, when it was arguably the dominating influence in world football. It created the modern passing game of football, whilst our English cousins were kicking and rushing. Tactics became key and at the same time they had the foresight to build a ground to make money from their sport. They invested huge sums 3 times to create 3 Hampden Parks. The 1st Hampden is the template for all other stadiums in the world from turnstiles to season books. 2nd Hampden is now so iconic as what happens when a football club goes bust. When 3rd Hampden opened it was the world’s biggest football ground and still holds the second highest attendance of all time.

130 years later, 500 people watch Queens Park play their matches. The Club, is still run ‘for the game’s sake’, as their motto proudly proclaims. Yes, the ground needs updating. If we value Scottish history at all, or have the slightest pride in the achievements of our ancestors, then we must persuade the SFA to do the right thing and remain at the world home of football. It is highly ironic that Queens Park led the other teams to create the SFA and then SFA, Hampden and Queens Park have been together since then. If the SFA leave then it is likely the other two die. That would be a travesty that future generations will be horrified about.

5. Mount Florida Community Council and Mount Florida Primary support. James Dornan and Johann Lamont both had positive things to say during the parliamentary debate. What other support have you received?

This is not just about the football fans. The local community will be massively impacted as well. We are actively campaigning in the local community to ensure that Hampden’s legacy and its future are protected. We have had significant support from Mount Florida Primary School, which is adjacent to Hampden. The children look up in awe at the mighty stands.

There are many local businesses would be hit very hard or go under without football and concert footfall. For example recent Ed Sheeran and Beyonce/Jay-Z gig brought in around 200,000 people to Hampden over two consecutive weekends. On the basis of £75 a ticket and travel, eating and drinking we could round that up to £100 a head then you are easily talking £15-£20m – which most would go into the running of the concert and local pubs, restaurants and shops. We have had an outpouring of support from the local area with 30 establishments proudly displaying our #KeepHampdenRoaring posters.

6. What obstacles have you guys had to overcome during the campaign. Who are the main threats to the campaign?

The biggest problem has been the timescale. We have had to move exceptionally fast. We are all doing this in our spare time and has been a mission to get things up and running. The key has been the Facebook, Twitter, Websites and Instagram pages that we have set up.

There is a general apathy with Hampden. It is not its fault that it has not been invested in. The current structure is 20 years old and was added onto when the old stands were taken down in 1990s. It needs a complete rebuild to bring it up to modern standards.

We also believe people not taking threat of Hampden loss seriously. Or not even knowing about the potential loss due to lack of publicity. We struggle to get more public figures out-with politicians, as they do not want to go against the SFA when maybe still involved in football or in some journalists cases not wanting to burn bridges with Murrayfield/SRU so staying impartial.

The biggest anti-Hampden views are transport links (not the fault of the stadium. Up to transport Scotland/Scotrail/Event organisers/Police Scotland to organise/plan better). Hampden has better transport infrastructure than Murrayfield for big matches with multiple bus, road and rail routes. Murrayfield has one way in and one way out.