The First Clash of the ‘Auld Enemy’

Scotland and England: the clash of the ‘Auld Enemy’ used to be the finest international fixture, but then, it used to represent little more than a fixture. The world’s oldest football foes endure an archaic and grudging rivalry which is, in fact, a perfect embodiment of the age-old union’s socio-political landscape.

It was, once, for those across both sides of the border an opportunity for the ultimate victory over the enemy, but nowadays, the Scots would rather deliberate a referendum with the ‘Auld Enemy’ than a football match. That hasn’t, however, concluded nor diminished the tale of the Anglo-Scottish football rivalry.

Interest in the inaugural fixture between Scotland and England wasn’t exactly overwhelming, with many unaware of the rules of association football before the sides met in 1872 at the West of Scotland Cricket ground. Several months prior, that same ground had hosted the first international rugby match between the two countries and many publications felt it was necessary to differentiate between the two sports in their match report for the first full international football match, such was the limited status of association football during that period.

“The laws of the Association game are exceedingly simple, numbering only 12, as against some 40 in the Rugby code,” wrote The Scotsman. “One of the principal differences consists in the entire prohibition of the use of the hands, except by the goalkeeper for the protection of his goal, thus making the skilful and always pleasing ‘dribble’ one of the best points of the game. A goal is scored when it is kicked under the tape, the ball not being allowed to be carried, thrown, or knocked in. Hacking, tripping, holding, or charging an adversary from behind are among things forbidden. Such are some of the differences of the two styles of play, and it will readily be admitted that the Association game is one which will commend itself to players who dread the harder work of the Rugby mode.” 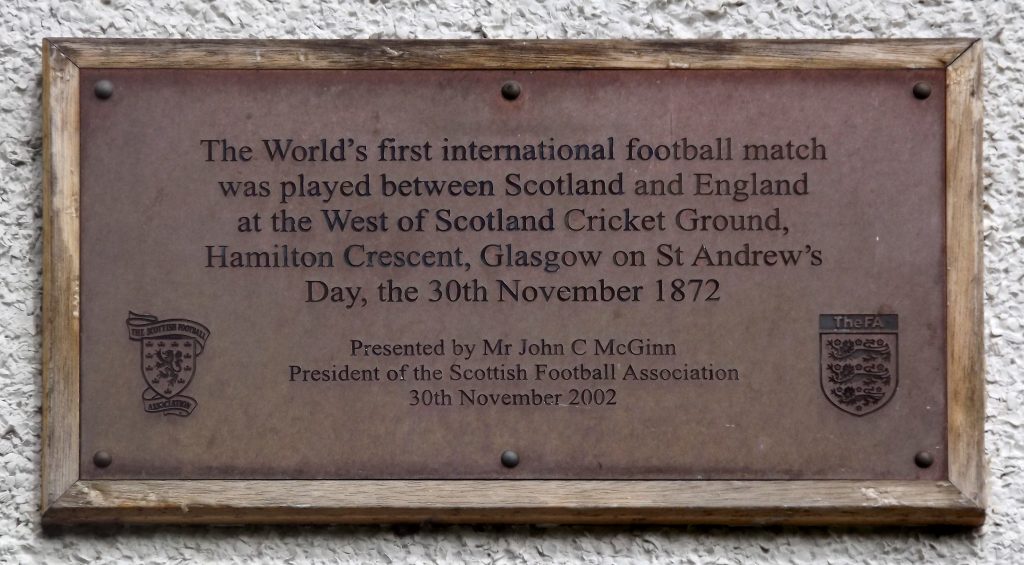 It wasn’t, technically, the first fixture between the countries and there were actually five unofficial matches contested between sides representing both nations; although they are considered unofficial since much of the side representing Scotland were, in fact, not even born north-of-the-border.

Secretary for the Football Association and England captain, Charles Alcock, organised the first five matches with a series of advertisements in several print publications – including a letter in the Glasgow Herald.

“FOOTBALL. ENGLAND V SCOTLAND. Sir, will you allow me a few lines in your newspaper to notify to Scotch players that a match under the above title will take place in London on Sat 10th inst., according to the rules of the Football Association. It is the object of the committee to select the best elevens at their disposal in the two countries, and I cannot but think that the appearance of some of the more prominent celebrities of football on the northern side of the Tweed would do much to disseminate a healthy feeling of good fellowship among the contestants and tend to promote a still greater extent the extension of the game…”

These fixtures were all contested at the Kennington Oval in London and this manifested in the Scots side, which comprised largely of residents of the metropolis; thereafter, the fixture was lamented with claims of uncompetitiveness when the Scots failed to win any of the matches played from the March of 1870 to the February of 1872.

Alcock reinforced these claims after he, once again, wrote a series of letters to newspapers north-of-the-border, wanting for an adequate selection of players from his opposition after the Scots had refused to recognise the legitimacy of the fixtures.

“I assert that of whatever the Scotch eleven may have been composed the right to play was open to every Scotchman whether his lines were cast North or South of the Tweed and that if in the face of the invitations publicly given through the columns of leading journals of Scotland the representative eleven consisted chiefly of Anglo-Scotians… the fault lies on the heads of the players of the north, not on the management who sought the services of all alike impartially.” Alcock wrote for the Scotsman. “To call the team London Scotchmen contributes nothing. The match was, as announced, to all intents and purposes between England and Scotland.”

Alcock would soon-after, in early 1872, have his wish and face Scottish opposition – although not yet on the international stage. Queen’s Park travelled to London for a FA Cup semi-final versus Alcock’s club side, Wanderers, which finished goalless, although the post-match discussions would prove significant.

Robert Gardner and David Wotherspoon of Queen’s Park stayed in the capital after the match to discuss the possibility of a match north-of-the-border and, eventually, alternative arrangements were made. Influential in his role within the world’s oldest football governing body, Alcock was an advocate for the success of association football – understanding the need for structure and competitive fixtures. Queen’s Park, who governed football in Scotland until the foundation of the Scottish Football Association, felt likewise.

Significant discussions between Queen’s Park and Alcock’s Football Association resulted in an agreement to discontinue the biannual fixtures in the capital in favour of annual games across both nations, with the first of these games arranged to be contested at the West of Scotland Cricket ground, on, rather fittingly, St Andrew’s Day.

It would be the same Queen’s Park side, including Gardner and Wotherspoon, that comprised much of the first official Scotland National Team line-up, while Alcock ultimately missed the fixture with an injury sustained a few weeks prior.

Strangely, much like their clash in the FA Cup, the tie finished goalless – although the quality of both sides, despite their contrasting styles, was widely praised.

The Glasgow Herald’s post-match report would read: “Both sides were working hard, and showing excellent play. The Englishmen had all the advantage of weight, their average being two stone heavier than the Scotchmen and they had the advantage of pace. The strong point of the home club was that they played excellently well together.”

Scotland simply couldn’t compete with the physicality of the English, instead employing a technically proficient brand of football and benefitting from their Queen’s Park collective. Queen’s Park had long inherited the tactical belief that slick, accurate passing was the key to success and this transpired when they represented their nation, whereas England preferred a physically-driven game with an emphasis on dribbling.

“The result was received with rapturous applause by the spectators and the cheers proposed by each XI for their antagonists were continued by the onlookers until the last member of the two sides had disappeared,” wrote The Field. “The match was in every sense a signal success, as the play was throughout as spirited and a pleasant as can possibly be imagined.”

Scotland and England continued the tradition of an annual fixture between the sides for over a century, with some conspicuous games contested between the two sides during that period, but none more so than that initial fixture, that outlined the archaic relationship of the world’s oldest football foes and the landscape of international football.